Unless one's been hiding beneath a rock for the last decade or so, there's been a very popular brand of fountain pen ink called "Noodler's" - named for those crazy folks who think they can reach underwater into a riverbank hole and pull out a catfish vs. losing fingers to snapping turtles. Hell of a sport, that!

I've been playing with fountain pens since grade school, and started out with cartridge-loaded Sheaffers, then graduated to the Parker 51 series, etc. I pretty much forgot about fountain pens over the intervening couple of decades until just recently, when I found myself writing multi-page (last one was 15!) reports longhand and just burning through pen refills like there was no tomorrow.
My old Sheaffers and Parkers had long since disappeared, so on a whim, I ordered a Cross ATX medium-nib pen through AAFES, and a quantity of black cartridges. That was all well and good until I realized that Cross ink tended to feather pretty badly, and those cartridges are a bit of a pain to swap out several times a week. So I ordered a Cross converter, and went shopping for ink. As I ordered the Cross converter, my eye caught a svelte little Chinese number called a "Lanbitou 866", with a hooded nib and very slim lines. What the heck, it was a whopping $4.00, I may as well give it a shot!

I knew that refilling fountain pens via piston converters offered a couple advantages, namely quick refills and a cleaning action as the ink is drawn into the pen from the nib end. While I run the risk of getting ink everywhere when refilling from an ink bottle, it's a calculated risk that I feel is manageable.
Reading all the reviews of Noodler's Ink online, I came to the conclusion that I couldn't go wrong with any of their offerings. About the only prerequisites I had for the ink I needed was that it had to be black (medical/legal requirement), and my own personal desire was that it flow nicely without feathering too much on paper. My Cross ATX did feel "scratchy" when using Cross cartridges, so if I ended up with an ink that had lubrication properties, that would be a bonus, too.
Enter Noodler's "Dark Matter". The story as printed inside the box was that a partial bottle of WWII Los Alamos Government ink showed up at Noodler's, with a request from the owner that Noodler's duplicate it as best they could. This they did, and the subsequent offering shows J. Robert Oppenheimer himself on the label, and "Nuke" on the box end to identify this particular formulation. Having retired myself from an agency closely related to Oppenheimer's project, I just couldn't say no.
I filled both the Cross and Lanbitou, and tried the ink on both copy paper and newspaper. The results are actually pretty darned good. The Cross flowed very easily, and did indeed smooth up the feel of the nib across the paper. It feathered a bit on newspaper, but nowhere near as bad as the Cross cartridges did. The Lanbitou was crisp, and while it didn't gush ink like the Cross, it was still very easy to make nice flowing text. The ink dried relatively quickly, so I would imagine it isn't what Noodler's calls "Bulletproof".
From both pens the color was dark, I guess you could call it pitch black. While I'm sure there are darker formulations from Noodler's, I have no qualms writing through this particular bottle of "Dark Matter" in the performance of my duties and while writing everyday missives.

On the left is the copy/printer paper, on the right is newspaper. For those who like Noodler's offerings, I can very easily understand why! 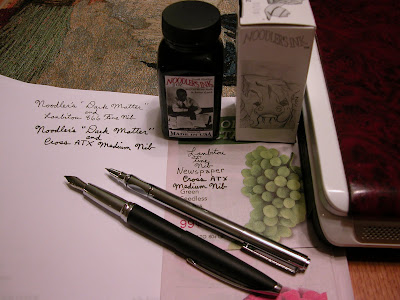 I found this interesting, I also use fountain pens mostly Japanese Pocket pens ie Pilot Namiki, Sailor, Platinum also RotRing...
I also use some Noodlers Black because it is intense black I've never heard of "Dark Matter" but it sounds really cool and the Noodlers bottle is killer....
With Jap Fine nib I have no difficulty writing names on the wings of insects...
Bolero

Probably not the best idea to have publicly declared an agency relation, but nice review never the less! ;-)

Gewehr98
"Are you gonna eat that?"

Got one of these rifles?